We Like It Like That tells the story of Latin boogaloo, a colorful expression of 1960s Latino soul, straight from the streets of New York City. From its origins to its recent resurgence, it’s the story of a sound that redefined a generation and was too funky to keep down.

In the 1960s, a new generation of musicians from East Harlem, the South Bronx and parts of Brooklyn fuse Afro-Cuban music with R&B, jazz, funk and rock to create Latin boogaloo. The bilingual style reflects the diversity of influences that surround the musicians in the city. It is a period of revolution and social awakening and young Latinos in search of their identity adopt Latin boogaloo as their soundtrack.

Once on the verge of leaving Latin music behind, the city’s young Latinos come to appreciate the music’s roots through boogaloo. But as salsa, a more traditional style of Latin music, grows in popularity by the 1970s, some say the Latin boogaloo is killed off, not by the fans, but by cultural and industry politics.

By the 2000s, after decades of obscurity, the artists who made Latin boogaloo popular finally get the recognition they deserve, with the help of DJs who spin their records for younger audiences and bands that pay tribute to the genre. Today, these artists are once again in demand and performing for fans around the world.

Through original interviews, music recordings, live performances, dancing and rare archival footage and images We Like It Like That explores this fascinating, though often overlooked, bridge in Latin music history, seeking to understand its context in the story of Latinos in America and its continued influence around the world today.

With support from the National Endowment for the Arts, the New York State Council of the Arts and a successful Kickstarter campaign, the film was completed in the fall of 2014. We Like It Like That had its world premiere in March 2015 at the SXSW Film Festival, and was screened around the world at festivals, including Film Society Lincoln Center's Sound + Vision, Alta Fidelidad, Ambulante California, Doc'n Roll, In-Edit Barcelona and the Urbanworld Film Festival, where it received the Best Feature Documentary award. The film was also nominated for a Cinema Tropical Award and was officially released in March, 2016. In October, 2016 the film had its broadcast premiere on the PBS program, America ReFramed.

Developed and produced by Muddy Science Productions and released in association with Codigo Films and Saboteur Media. Available on iTunes, Amazon, Vudu and Reel House. 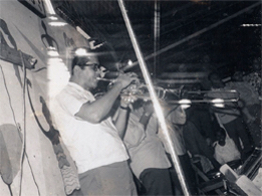